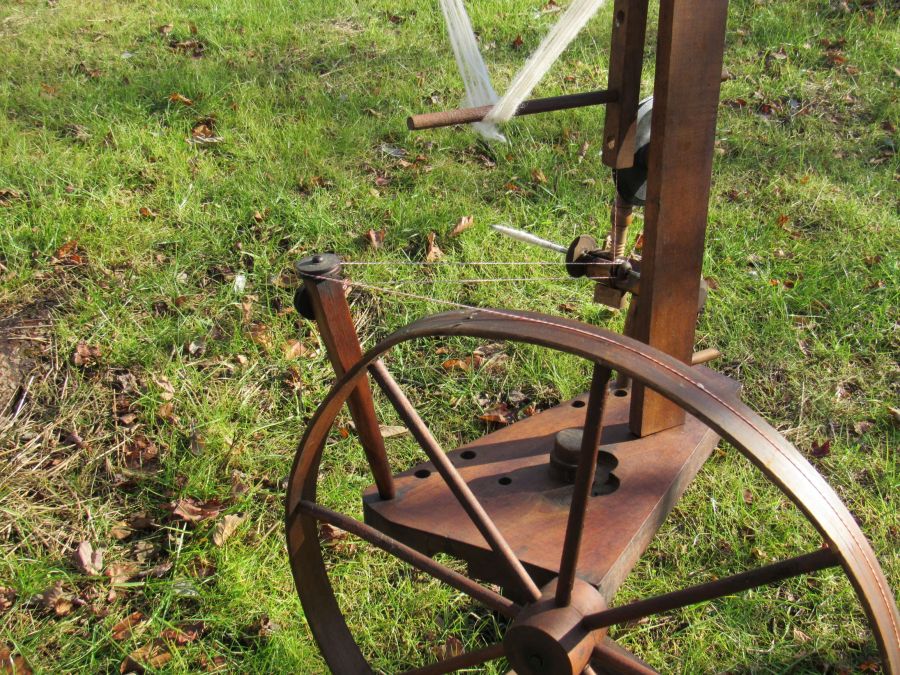 These unusual wheels occasionally show up for sale and most people seeing one for the first time think it is a hilarious Frankenwheel—an assortment of wheel and reel parts cobbled together by someone who has no idea what they are doing.

In fact, it is a cleverly designed wheel and reel combination patented in 1871 by George Hathorn of Bangor, Maine.  It can be used as a spindle wheel, a reel, to wind bobbins (or quills) and to ply, by rearranging the parts in different configurations.  Hathorn was born In Lincoln, Maine in 1842, and married Phebe Nute in 1870, a year before patenting this wheel.

His marriage is important to the wheel because John Henry Nute, who appears to be his wife’s brother, had patented a similar wheel in Nova Scotia in 1870, a year before Hathorn’s patent. Whether the two men shared their ideas or one lifted the invention from the other, we don’t know.  But the competing patents must have made for some interesting family dynamics.

Both men’s wheels were designed to be clamped to a table top or bench when in use—making them relatively portable and easy to store.  Nute’s wheels, commonly referred to as “hurdy” wheels, had distinctive drive wheels, painted red with black half circles.

In his patent application, Hathorn notes that the purpose of his invention is the “production of a simple, cheap, and easily operated hand spinner,” in which the spinner can face the wheel while spinning and move the drive wheel “with but little motion of the shoulder.”  (Better views of Hathorn’s patent documents are here: https://patentimages.storage.googleapis.com/99/2b/62/eb9628797193c8/US121517.pdf). Great wheels, of course require constant shoulder movement, so this must have been considered easier on a hard-working body.

Hathorn produced his wheels in Bangor, Maine area for several years and appears to then have moved on to other types of manufacturing.  He died 1909.

Hathorn’s wheel has a triangular base with a series of holes that allow for different set ups.  My wheel came with a homemade stand attached through a hole in the middle of the base.

The drive band passes over two pulleys and the spindle whorl.

Both of the pulleys on mine were damaged over time.

One was repaired, and the other needs to be.  Unfortunately, one side of the damaged pulley is so degraded that the drive band falls off and I haven’t been able to spin very much on this wheel.  It’s on the list of repairs for this winter.

Many patents were lost in patent office fires, so we are fortunate to be able to see Hathorn’s.

As the patent drawings show, it was designed to have a spindle head with a removable guidewire (part I) used for reeling off the spindle onto the reel.   My wheel came with a cobbled-together spindle head that I replaced with a working one.

The short height of the one I’m using contributes to the band falling off the upper pulley, but it should work once the pulley is repaired.

If not, I’ll use a taller spindle head.

The reel has dowels along its upright and two on the bottom.

When used as a reel, the bottom ones fit neatly in holes on the base.

Each reel arm has a series of holes for different skein sizes,

and one has a metal spring holder to guide the thread (part a in figure 5 of the patent drawings).

The patent does not show the reel counter, but they seem to be on most of Hathorn’s manufactured wheels.

When the reel is turned clockwise, the screw moves along the rotating cog,

which has a partial spiral that increases in elevation and then abruptly drops.

A spring wire moves over the elevating spiral and then falls off the cliff with a thwack, acting as a counter for rotations of the wheel.

When using the reel for winding bobbins or quills, it is turned to be laid flat on the base, again inserting dowels into holes.  On mine, however, one of the dowels is too tight a fit to get into the hole—but I’m not likely to use this as a bobbin winder, so probably will leave it as is.

The reel is designed to fold up, which Hathorn points out “is of great convenience in packing for transportion.”

For plying, Hathorn shows in Fig. 7 how the drive band can be crossed, which will cause the spindle to reverse direction.  The spindle post can be moved to different holes for plying and to change tension.

I am looking forward to repairing this wheel and putting it through its paces.

My references for the history of Hathorn’s and Nute’s wheels, and the relationship between the two are below. They are the result of wonderful research and provide much more information than I included here.